Members of the public who are in receipt of welfare benefits and are offered payment for involvement need to consider how the payment might affect their benefits. This is a complex topic on which the Benefits Advice Service has expert knowledge and it can offer valuable advice to those who:

The advice is free, confidential, informed by the latest regulations and personalised (the advice is specific to the individual’s circumstances). Please ask anyone wishing to access the service to email benefits@invo.org.uk or to phone on: 02380 651088.

We are delighted with all the positive feedback from our annual conference Progress and Practice in Involvement 2015, held on 3rd June. Nearly 100 people attended, a quarter of whom were members of the public. Most people who completed an evaluation form rated the day overall as good or excellent. The People in Health West of England team would like to say a big ‘thank you’ to everyone who helped us make this a successful day by running sessions, coming along and helping us organise the event.

The Nuffield Council on Bioethics has published a report on how children and young people can ethically be involved in research. The report makes recommendations about the roles and responsibilities of children, their parents or guardians, researchers and others. A magazine version and a short animation film are also available. 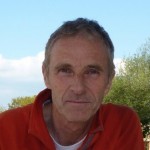 Our public involvement facilitator Mike Bell started work with the People in Health West of England Patient & Public Involvement (PPI) Team last week. This post is funded by Bristol Health Partners to support facilitation of involvement in Health Integration Teams. Mike’s most recent experiences include health complaints advocacy and working with disabled students to increase the numbers applying to higher education. He will initially be concentrating on building up our work with children and young people.

The University of the West of England has appointed Andy Gibson as Associate Professor PPI to start at the end of April 2015. Andy has led the innovative development of patient and public involvement (PPI) in the Collaboration for Leadership in Applied Health Research and Care (CLAHRC) South West Peninsula (PenCLAHRC) over the last five years. During this time he has spearheaded the involvement of patients and the wider public in generating ideas for research projects to be taken forward by PenCLAHRC. Andy will work closely with the West of England Joint PPI team and we are looking forward to benefiting from his insights and experiences.

Say it for our admin staff!

The departure from PHWE of Kim Thomas, the Team administrator and PA, prompts Hildegard Dumper her manager for the past 3 ½ years to reflect on the vital role a good administrator plays in the success of a project.

The story starts in February 2014, when I was appointed to set up a new team that would support four partners to develop a strong public involvement approach to their work. The partners were Bristol Health Partners (BHP), CLAHRC West, NIHR CRN West of England and the West of England Academic Health Science Network (WEAHSN), with University of West of England providing the Academic Lead. When PHWE started we were originally based in the offices of WEAHSN in S Plaza. Rosie, Kim and I started our life with PHWE there. It was a time of great optimism and adventure. WEAHSN had just been set up, CLAHRC was embarking on new horizons, CRN was in the middle of being re-organised and BHP was developing a new business plan. This was an opportunity to put in a new approach to public involvement; to challenge the traditional NHS tendency to work in silos, and work in a collaborative way on the issue of public involvement. By sharing resources we aimed to increase the partner’s efficiency and effectiveness in public involvement.

Traditionally there is a big divide between public involvement in health research and public involvement in service provision and improvement. The public involvement staff in each sector rarely works together. We were being given the opportunity to work across these silos, sharing knowledge and expertise and avoiding duplication. There was a sense of adventure that comes with the realisation that we were pioneers in a new way of working and were treading new ground.  PHWE were going to put in place a model that would show how it could be done; we were going to change the world – and the admin post was pivotal to making this a success!

WEAHSN, CLAHRC West, BHP and CRN are all hosted by different organisations. In August 2014, Kim set about bringing together the culture, systems and processes of 4 quite separate host organisations – UHB, RUH Bath, UWE and University of Bristol with NIHR being an additional factor here and there. These were systems affecting how PHWE finance, expenses claims, reporting mechanisms, email addresses, website, codes, passwords etc had to be carried out. Kim became good friends with all the important people in IT, catering, estates, travel firms, HR, hospitality, venues, hotels and so on. She won all of them over with her charm and good humour, always done with such cheerfulness and a ‘can do’ attitude. Perhaps the fact that she came from outside the NHS helped – she brought a fresh eye to long standing challenges. In addition she came with experiences and knowledge of systems and practices which could improve the efficiency of PHWE and hence its partners also. Everything was a practical challenge which could be overcome with a bit of determination.

It was Kim’s patience and dogged refusal to give up that was instrumental in getting the people in the organisations she dealt with to make compromises. Her patience and recognition of her role in educating finance, HR and other staff, on the complexities of the project led to small but significant results. Small but important bureaucratic changes were made; expense claim forms were amended to be more user friendly for public contributors, finance staff were prepared to have some flexibility in managing claims and IT staff went out of their way to help make the different systems compatible.

Her leaving will be a great loss to us all at PHWE. Not just because she is a lovely person, but with her goes all the memory and knowledge that she has acquired in her role. We couldn’t have achieved what we have without her.

So thank you Kim for all your hard work, for having been such fun to work with and for having made the last few years such an adventure!

Our new workshop on the evaluation of public involvement is developing well.  We’ve run early versions of the workshop with the Centre for Appearance Research at the University of the West of England, and in October 2018 for the first time we delivered it for the People in Health West of England regional network’s learning and development programme.  The workshop includes sharing some of the key issues and debates about the evaluation of public involvement, and then outlines three different approaches to help participants plan and develop their own evaluations.  We’ve had really useful feedback and have now taken it to the conference in Newcastle on ‘International Perspectives on Evaluation of Patient and Public Involvement in Research’ 15-16 November 2018.  We are looking forward to sharing the outline of our new workshop and getting further feedback from colleagues to ensure what we offer hits the spot.  We hope that we might find some new collaborators who would like to deliver our workshop so that we can develop it further.

What does co-production actually mean in practice? asks Hildegard Dumper, the West of England AHSN’s Patient and Public Involvement Manager

You might have noticed there are a number of buzz words currently flying around, the most common starting with the prefix ‘co’: co-produce, co-design and co-create. Even NHS England talks about co-design in its Five Year Forward View. I thought I would share with you my understanding about these ‘co’ words, and what they mean for us.

The first thing we need to understand is that all these ‘co’ words describe an approach to working with the public that regards each individual, regardless of their role, as having a valuable contribution to make. Central to this approach are principles of reciprocity and equality. We at the West of England AHSN have committed ourselves to being guided by these principles and working in a co-produced way.

There are a number of definitions of co-production. The National Co-production Critical Friends defines it as…

‘a relationship where professionals and citizens share power to plan and deliver support together, recognising that both have vital contributions to make in order to improve quality of life for people and communities.’

‘delivering public services in an equal and reciprocal relationship between professionals, people using services, their families and their neighbours. Where activities are co-produced in this way, both services and neighbourhoods become far more effective agents of change.’

‘service users, or the public in general, working in partnership with service providers or commissioners to jointly make decisions.’

So what does this actually mean for us in practice? There are a number of things that need to be considered when deciding to work in a co-produced way.

Decide which pieces of work are suitable for co-production and what can and cannot be achieved by involving people in this way.

Consider what resources you have available. Think about:

Develop and agree with your public contributors a role description which clearly states the time commitment expected from them, the length of their involvement and payment details (a template role description is available).

Identify where power imbalances can exist and take steps to minimise them. For example, don’t have meetings at a time that excludes public contributors from attending or from taking part in the background thinking and development of a project.

Work with a wide range of people, using different people for different pieces of work.

Hallowe’en fell slap bang in the middle of half term this year which gave us a great excuse for a gory themed October YPAG.  The group “decorated” the room with spider webs, spiders, pumpkin lanterns and bats.  Mike provided blood-filled syringe pens and the group had a chance to draw blood from dismembered arms.  Of course there was work to be done, commenting on information sheets for a quality of life survey, deciding on website icons and ranking the issues that most affected them while at school.  Lunch was provided and the researchers all brought trick or treat snacks so no excuse for going home hungry.  Evaluations from researchers were all very positive and the group members all seemed to enjoy the day.  If you are young and would like to join or you  know any young people aged 10 to 17 who might like to join us, please contact Mike mike.bell@bristol.ac.uk to find out more.  If you are a researcher and would like to consult the group about your research, contact Mike as well. 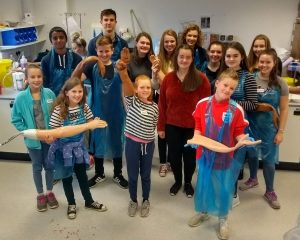 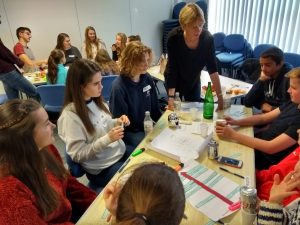 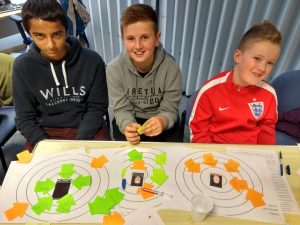