This short video from the Centre for Academic Primary Care at the University of Bristol is a good example of how research has revealed the miscommunication between patients and GPs. 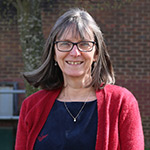 We are delighted to be able to announce that Julie Hapeshi, has agreed to take on the role of co-chair for People in Health West of England. Julie will be sharing this role with Cathy Rice, our public contributor co-chair. Julie brings to the role a wealth of experience and insights. She is Deputy Director of the Research Design Service (RDS) and of Research & Development at Gloucester Hospitals Trust and a founding member of PHWE. In addition, her RDS role links Julie to the new INVOLVE team. We are all looking forward to working with Julie in her new role as co-chair.

People in Health West of England (PHWE) is a unique initiative promoting innovative and effective public involvement in research and evidence-based service improvement. From its inception People in Health West of England has been co-chaired by a public contributor Cathy Rice and a professional Nicky Williams. Nicky who was Deputy Director of Research and Innovation at North Bristol Trust has now moved on to take up the role of National Director for Support and Delivery of Health and Social Care Research in Wales. We would therefore like to recruit another professional to play the crucial leadership role Nicky has played around public involvement. As well as meeting our needs for a professional co-chair this is an exciting professional development opportunity for the right person.

More information: PHWE Strategy Group – Professional Co-chair Invitation and Role Description If after reading the invitation and role description, you would like to find out more contact David Evans, Academic Lead for the project David9.Evans@uwe.ac.uk or telephone 0117 328 8750

Closing date: Expressions of interest outlining what you would bring to the role along with a brief CV (one page maximum) should be sent by Monday 2nd May 2016 to Kim.Thomas@nihr.ac.uk

Call for contributions to conference on co-production and interdependency

The Support and Treatment After joint Replacement (STAR) research project team shows how patient involvement (not only participation) has been embedded into a research project and how it made a difference.

I was reminded how the development of a truly patient and people led health service takes time at the People in Health West of England Awayday in November. During an exercise reflecting on our achievements over the past year, we realised that the idea for a joint PPI initiative was first mooted in 2008, seven years ago. This evolved first into People & Research West of England, before being re-launched as People in Health West of England (PHWE) in 2014. Throughout this time the network has been chaired by Nicky Williams, Deputy Director of Research, North Bristol NHS Trust. Nicky is now leaving us to take on the post of National Director of Support & Delivery for Health And Social Care Research for Wales.

Nicky told me: “It has been a pleasure to co-chair the strategy group with Cathy Rice over the last few years and I look forward to hearing all about the work of PHWE in the future. I’m really proud of how PHWE has grown from the little seed of an idea that we first discussed in 2008 – a real credit to the commitment of the public contributors and staff involved.”

Another event a week earlier also reminded me that the development of good public involvement takes time.

At a panel discussion on cities, health, people and leadership at the Festival of the Future City last week, Professor David Evans pointed out that INVOLVE is now 20 years old. INVOLVE is funded by the National Institute for Health Research (NIHR) and was established 20 years ago in 1996 to support public involvement in the NHS, public health and social care research. It is now well established as the key body to drive forward and support good practice in public involvement in research, providing the benchmark for other areas of health and social care. In the context of an NHS that has gone through several major structural changes in the past few years, this consistency is a major achievement.

Progress reports for many initiatives within the National Institute for Health Research (NIHR) include a summary of progress in implementing patient and public involvement and engagement (PPIE). This year, those summaries have been extracted and made publicly available. The Central Commissioning Facility (CCF) of the NIHR welcomes feedback on these reports. For example, it would be helpful to them to know who is reading them, whether readers find them informative and useful, and how they could be improved. Please email your comments or contact the CCF patient and public involvement (PPI) team.

If you are a member of the public and would prefer a paper copy, please contact the CCF PPI team.

The University of Southampton has been awarded a four-year contract worth £3.2 million to deliver INVOLVE, the National Institute for Health Research’s Centre for Patient and Public Involvement, Participation and Engagement. This contract takes account of the Going the Extra Mile report. Through a new partnership with the Research Design Service (RDS), INVOLVE will provide leadership in public involvement in research at national, local and regional levels. Find out more